Traditionally hostility towards Jews was based on religious grounds and various myths around them. A new racial antisemitism emerged in the last third of the 19th Century.

The new pseudo-scientific antisemitism claimed that Jewish people belonged to an ‘inferior race’ in contrast to the ‘superior German Aryan race’.  Thus giving antisemitism a new dimension. The new antisemitism falsely deemed Jewish people as ‘genetically evil’ without the possibility to change – for example, through baptism. 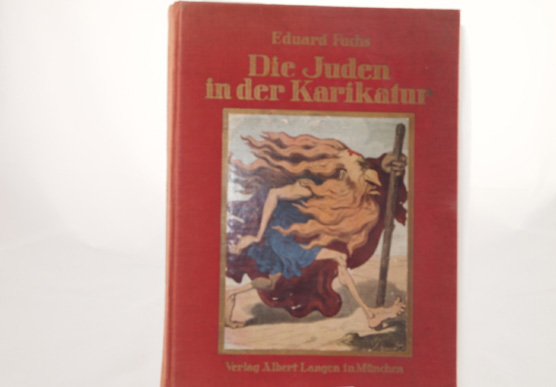 Eduard Fuchs chose “The Wandering Jew”, by Gustave Dore, as the cover image for his collection of antisemitic caricatures through the ages in 1921. For Fuchs the haunted wanderer summarised the traditional antisemitic prejudice: Jewish people remain alien within Christian nations and are condemned to eternal migration.
© National Holocaust Centre and Museum

It was claimed that supposedly Jewish interests threatened the German nation. Jewish people became the focal point of a nationalistic imagination that projected many negatives and fears of modern society onto them:

The front cover of this national-socialist propaganda booklet, “Trust No Fox“, highlights a central prejudice of modern antisemitism. The book illustrates for primary children in bright colours and rhyme the many ways in which the supposedly ‘evil character’ of Jews disrupted German society. Jews are falsely portrayed as dishonest and of cunning character.
© National Holocaust Centre and Museum

The core Nazi leaders were violent antisemites who believed that Jewish people polluted healthy German blood and led an international conspiracy against Germany. Jews were defined as the enemy within, competing for vital resources.

How did Jewish children experience the growing social isolation under Nazi rule? What did parents do to help them?
© National Holocaust Centre and Museum

Within the Nazi ideology the struggle for survival between the “Aryan” and the “Jewish” race made it imperative to exclude Jewish people from citizenship and to expel them from the German nation. Ultimately, this lead to deportations and genocide.

Nazi ideology frequently served as welcome justification for the pursuit of personal interests. It allowed those who stole Jewish assets to see themselves as guardians of the common good. Ruth David describes how the Mayor of her hometown appropriated her father’s factory under the pretext to create jobs.
© National Holocaust Centre and Museum