Judaism is the religion of the Jewish people and was revolutionary in its belief in one God. However, through its culture and philosophy, Judaism is also a way of life. After the destruction of its central sanctuary, the temple in Jerusalem, Jewish communities spread around the world. These communities reached Germany in the 4th Century.

Like Christianity, Judaism is characterised by a variety of different beliefs and practices. Liberal Judaism embraced contemporary society and saw the Torah – the Jewish holy scripture – as open to interpretation. Liberals allowed for adjustments in religious practice. For example, those worshipping could use their local language when praying in synagogues. However, Orthodox Judaism, in reaction to this new liberalism, tried to preserve the traditional faith. Conversely, the Conservative Movement sought to strike the balance. They mixed the traditional with the modern to forge a compromise.

Even within Jewish Orthodoxy the variations were wide. Listen to Bernard Grunberg describing the religious practice in his family.
© National Holocaust Centre and Museum

Since the 19th Century, a growing number of Jewish people converted to Christianity. However, by the 20th Century, religious indifference increased and mixed marriages between Jewish and non-Jewish people became more common. Many came to regard Judaism as cultural heritage rather than a living faith. Nevertheless, a sense of Jewish identity prevailed throughout the Weimar years.

Ice cream after the service is the secret attraction that motivates little Ellen Rawson to go to synagogue. Listen to her description of the liberal Judaism of her father between moderate faith and civic engagement.
© National Holocaust Centre and Museum

As a reaction to antisemitism and Nazi persecution, there was an increasing awareness of Jewish identity. How quickly this happened depended upon the personality of the individual concerned and their specific circumstances.

How were Ruth David’s mother and aunt brought up with regards to religion? Had religion become a thing of the past in the life of an educated, modern woman like Ruth David’s mother? How and why does her attitude towards religion change under Nazi persecution?
© National Holocaust Centre and Museum 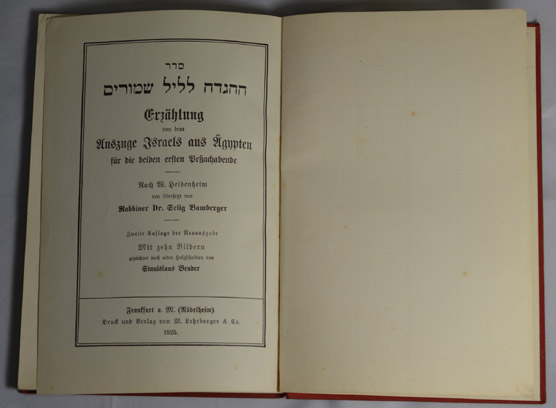 The Haggadah, which means the “The Telling”, recounts the story of the exodus of the Jewish people from slavery in Egypt. In 1933 Berlin, Seder evenings (the night when the Haggadah would be recited in synagogues) were so overcrowded that people had to be turned away. Consider the renewed importance of the exodus story in the context of Nazi Germany. This Haggadah, belonged to Ilse Buchsbaum, born in Berlin 1929.
© National Holocaust Centre and Museum